***UPDATE: The First Thing He Noticed Was Her Legs is now a short film script. I picture this as the cornerstone of a web series of one-off stories, including the namesake stories of Genoveva Torres, Gemma Galgani, Monica, Lucia, Dymphna, Ulrika, Scholastica, and more.

Music speaks to me in various ethereal ways. I think that’s a sentiment many of us have. I’ve experienced music on a different level from most people, I think. When I listen to a song, I hear each track. I mean that each track plays distinctly in my head, and when I’m really drawn in, I hear it as four or five or a dozen different stories, as lives played out in the melody, harmony, counterpoint, noise, doubling and beat. I was in jazz band in high school, and even after 12 years of piano lessons, I often failed to do my simple, rhythm section job of just playing the chords in time with the drums and bass, simply because I was so easily distracted by the intermittent coming and going of the trumpets, trombones, saxes, guitar, bass and percussion, and with the blasts and scales of the improvising soloists.

It’s not even one style of music that does this, though I have the most trouble even staying with some of the complex art-rock of the ’60s and ’70s, and with modern jazz that sends different instruments into separate improvisations, and in general I’m psychologically disrupted if the music is too loud. I curate my playlists with a great deal of care – everything from Mozart to Modest Mouse, Chopin to the Cure, and heavy on 90s grunge and indie-rock, with some classic jazz like Spyro Gyra, Chick Corea, Dave Brubeck, and Thelonious Monk.

As a teen, I took in the loud, dirty tracks of punk as a way to escape the dark towers built in my own mind. My previously sunny childhood had clouded over as long-buried issues in my parents’ lives shattered their bond. I was their only child, seemingly wise beyond my years, and they shared with me a number of things that had they been in their right frame of mind, they’d have known to keep to themselves, or unpack with a trained therapist. Sprawling on a grassy knoll and just forgetting the world in those days just made my mind too loud.  Loud. The sight of the boys from school whose rebellion and intelligence I so respected letting loose behind the mike or in the mosh pit made me smile.

Like Torry from “The First Thing He Noticed Was Her Legs,” Kings Court was one thing that gave me my legs back. Being outrageous in the swell of noise grew a sprout of confidence in my being.

First, a word about King’s Court in Sioux City, Iowa in the late ’80s. There really was a place — it was an elementary school converted into a bar upstairs and in the basement, an open space with a stage and sufficient plugins for instruments and amps where people gathered. The ones with multiple piercings, spiky hair and mismatched, torn clothes and Doc Maartens were there, along with kids from the Country Club valley who sported torn white or black tees with their $400 jeans, and whose parents supplied guitars and basses so they could play, too. A couple of them were good. What teen doesn’t want a place to act outrageous. I had to sneak out to go at all. Packing my dreary, bohemian dresses and contraband black eyeliner into a duffle bag, I stayed over on Saturday night with a friend who lived in the King’s Court ‘hood so we could slide into this basement of noise, of slam dancing, of spiritual freedom. 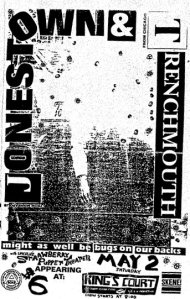 The story was published in a literary journal called “The Aviator.” It retells the story of Genoveva Torres Morales. The true story of this 20th century saint is that she had her leg amputated without anesthetic, and wrote extensively about spiritual freedom. “I loved freedom of heart very much, and worked and am working to achieve it fully. It does the soul so much good that every effort is nothing compared with this free condition of the heart.”  Dance is often an expression of spiritual freedom. In the story, Torry Morales is a dance teacher whose legs must be amputated after she is in an auto accident with her fiance. Overwhelmed by what he sees as her bleak future, Torry’s fiance leaves her. A year later, she’s rolling around town, suspiciously joyful, even in trouble for being happy. Redemption, the power of words, spiritual freedom, truth, and the power of fully expressing in spite of those who would censor her all wind around the driving punk rock.